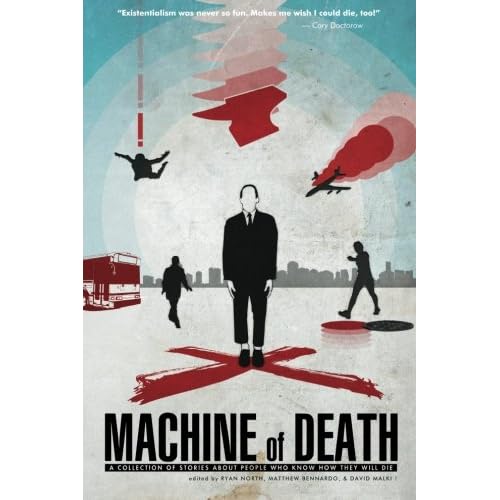 On 26 October 2010, the guy who writes the marvelous Dinosaur Comics and a bunch of others self-published a book (because nobody would publish it for them) of short stories based around the idea of a machine which could tell you how you would die. The book is called Machine of Death. They happened to choose October 26 as the publication date without knowing that Glenn Beck’s latest tome of dangerous absurdities with the suitably loony title “Broke: The Plan to Restore Our Trust, Truth and Treasure was to be released on the same day. While it’s nice that Machine of Death pipped Beck’s book in the amazon.com sales rankings on opening day (proof), what’s most wonderful about this little episode is that it so incensed Glenn Beck that he had a wee rant about the book on his widely syndicated radio programme. It’s so gloriously insane, there’s nothing to do but quote it in full:

And I want to tell you that, umâ€¦our books are ALWAYS #1. And I find it REALLY fascinating, FASCINATING, that if you go to Amazon.com, Broke is number THREE. And the two books that are ahead of it â€” one is Keith Richardsâ€™ Life, which is getting a TON of â€” you know, thatâ€™s everywhere.
But this is a book about, you know, how he snorted his fatherâ€™s ashes, after death. (sarcastically) THATâ€™S cool. This is the SDS [Students for a Democratic Society] book. This is for all of the â€” this is for [union leader] Andy Stern whoâ€™s all, I guarantee you heâ€™s on the phone and has been the last few days, you know, with people like, you know, Bill Ayers going â€œAll right, DUDE! Ah, do you remember when we were rolling around in the mud like animals? Remember that? This guy was smoking ash â€” you know, smoking his dad, and, and, popping stuff into his veins? Ah, those were the DAYS, man.â€ And then William Ayers was like, â€œWhaddaya mean, those were the days? Iâ€™m still doinâ€™ that stuff, man!â€
So thatâ€¦ â€œculture of death.â€ And itâ€™s an escape into the past, of, you know, the Woodstock stuff.
And then, the #1 book â€” TODAY, at least â€” is Machine of Death. And itâ€™s a â€” collected stories about, you know, people who know how theyâ€™re gonna die. Haowww!
So you have DEATH â€” I know itâ€™s called Life, but what a life it is, really! Itâ€™s a culture of death! OR, â€œHow do we restore ourselves?â€
These are the â€” this is the left, I think, speaking. This is the left. You want to talk about where weâ€™re headed? Weâ€™re headed towards a culture of death. A culture that, um, celebrates the things that have destroyed us. Not that the Rolling Stones have destroyed us â€” I mean, you canâ€™t always get what you want. You know what Iâ€™m saying? Brown sugar. I have no idea what that means.
— Glenn Beck, The Glenn Beck Program, October 27, 2010

This, as if it needs to be said, is the other side of the Angel of Death ad I wrote about the other day; what happens if the font of inchoate hatred which powers the Tea Party movement isn’t carefully channeled through propaganda wizards and filmmakers and spin doctors. Wonderful. Frightening.