Over at The Hand Mirror Julie is co-ordinating a pay equity faxathon. 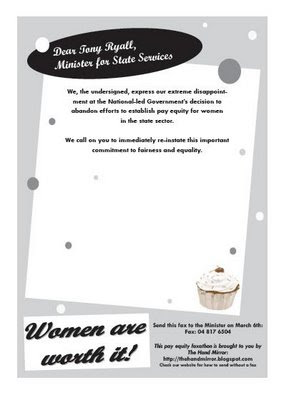 This is a great way to mark International Working Women’s day by telling Tony Ryall that women deserve pay equity, and that National should uncancel the programmes that would have addressed the pay inequality affecting female social workers and school support staff.

So pop on over to The Hand Mirror, download the fax, collect some signatures, and tell National that women are worth it!